This is the ultimate experience of Andalucia; staying in the most beautiful 4 and 5 star luxurious hotels, as you are chauffeured around the great Moorish cities of Granada, Seville, Cordoba and the vineyards and bodegas of Jerez de la Frontera.

In each city you will have your own personal, professional guide who will give you a fascinating tour of the main monuments and sights using their expertise to ensure that you get the very best out of your time and can tailor any visit to suit your particular or special interests. Your private chauffeur will drive you though stunning mountain scenery dotted with crumbling hillside castles as you seamlessly transfer from one city to the next, with maybe a stop for lunch along the way.

This holiday can start on any date you request and we can arrange transfers to Granada from your arrival point in Spain. It is also possible to substitute having a driver for 1st class train travel between the cities.

After you have settled into your hotel in Granada you can take a short walk to the souk like streets of the Alcaiceria surrounding the cathedral, here you can try the delicious array of tapas that Granada offers from broad beans cooked with ham, meat balls cooked with almond and saffron to crumbling slices of Manchego cheese and the best jamon serrano from the Alpujarran village of Trevelez.

The Alhambra Palace, was short-listed to be one of the New Seven Wonders of The World. It is an absolutely stunning complex of palaces, summer gardens, fountains and courtyards which once seen is never forgotten and often revisited time and time again. Built during the reign of the pleasure loving califas, every view inside the complex is a picture of harmony and balance with natural light and the sound of running water creating the perfect environment for meditation and relaxation; which was the essence of Moorish life at this time.

This morning you will be met by your own personal expert and guide who will give you a three hour tour of the entire palace complex and gardens that will bring every corner to life through its history and legends.

Late afternoon/early evening is the best time to wander around and loose yourself in the Albaicin, the medieval quarter of Granada which is now a UNESCO World Heritage Site. Winding your way up you will eventually reach the Plaza de San Nicolas where local flamenco artists gather to practise, overlooking the famous panoramic view of The Alhambra with the snow-capped sierra Nevada behind.

Day Three - Transfer with your driver to Cordoba for 1 night

In medieval times Cordoba was the most advanced city in the whole of Europe, a centre of culture and learning where Christians, Muslims and Jews lived together in a thriving society.

Today it is quieter Andalucían city with an unpretentious atmosphere, quite different from the passion and flamboyance of Seville. The streets surrounding the Mezquita are filled with ancient bodegas and tapas bars and a glass of the local sherry like Montilla is an absolute must.

For this afternoon you will have a private tour of Cordoba including the Mezquita, Juderia, Alcazar and synagogue. The great mosque was built to rival Mecca and is a building of incredible mystic powers and the first glimpse inside is a jaw dropping experience. The jaw then drops further when you encounter a huge catholic cathedral hidden in the middle!

Surrounding the Mezquita is the delightfully crumbling Juderia; a fascinating place to get lost in as you wander around the narrow maze of streets, lined with geranium filled balconies and green shady plazas. There are many things to discover in the Juderia from original Moorish bath houses, to one of the only three synagogues to have survived the expulsion of The Jews from Spain.

Day Four - Transfer with your driver to Seville for 3 nights

The flamboyant Andalucían capital city of Sevilla combines its Moorish history with the legacy of the Spanish Golden Age when Columbus brought back immeasurable wealth from The Americas. The beautiful Arabic minaret "la Giralda" towers over one of the largest gothic cathedrals in the world and the colourful Plaza de España contrasts with the Mudejar palaces of the Royal Alcazar.

For your first evening in Seville you will have a reservation at what is known as THE place to watch flamenco in the city. Unpretentious and authentic; it is where you can see the up and coming National stars who are studying the art of flamenco at the prestigious local school. The setting is also perfect; a traditional Andaluz patio on the edge of the barrio Santa Cruz.

Today you will explore the city of Seville, beginning with an exclusive private tour of the highlights of the city with a professional, passionate local guide. Starting off in the cathedral; one of the largest Gothic churches of the world where from the Arabic minaret La Giralda you get stunning panoramic views of the city. Across the square is the Alcazar; a royal palace for over 1000 years and home to some of Spain's most beautiful Mudejar architecture and gardens. Finishing off in the romantic barrio Santa Cruz, the medieval part of the city which is a labyrinth of narrow streets and white washed houses with iron grilled windows and geranium covered balconies.

After lunch you are free to further explore the city including maybe a boat trip up the Río Guadalquivir or relax with a book in the shade of the Marie Louisa Park.

Jerez is about 85km from Seville and on this private guided tour, before reaching the town, you will stop off at a private vineyard to learn of the many factors which affect grape production and quality. Following this you will proceed to one of the bodegas to be shown around the spectacular buildings with rows upon rows of sherry butts stacked one on top of the other. These buildings are often compared to cathedrals and it is certainly true that they give the impression of being sanctified places. After a detailed tour including a complete explanation of the sherry-making process there will be a tutored tasting of the different styles of wine including high end wines not normally available.

On the tour you will also find out how sherry vinegar and Jerez Brandy are made and you will also get the chance to sample some of the top brandies available. After this first visit you will then move on to a much smaller family bodega where as well as being shown around you will be able to taste some exceptionally fine wines unknown to all except a few select connoisseurs. To finish the day a late lunch will be enjoyed in one of the best restaurants in Jerez, accompanied, of course, by fine sherry wines. 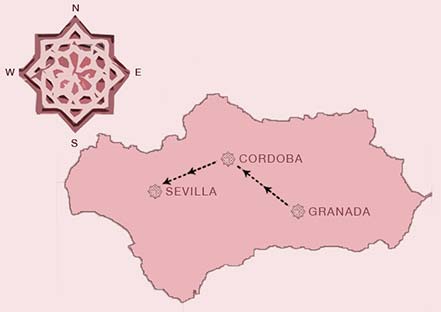 A few nights in Madrid can easily be added to this tour via the high speed AVE train; just a two hour trip from Cordoba.

Let us make your dinner reservation at the top restaurants in Andalucia such as Abantal with chef Julio Fernandez in Seville and Chocco with chef Kisko Garcia in Cordoba.

Seville has a stunning collection of bijou museums; fascinating places to spend an afternoon or pure self-indulgence.

Instead of the sherry tour to Jerez de la Frontera you could spend a day with our guide visiting a traditional olive oil mill in the Sierra de Grazalema or the Jamon Iberico farms of Huelva.

Experience a traditional Hammam bath in either Granada, Cordoba or Malaga with the cold, warm and hot pools, massages and other treatments to completely relax body and soul. Your hotels also all have sumptuous spa facilities and treatments to book.

Add in a few days of relaxation at a luxurious hideaway on a converted olive estate in-between Seville and Jerez, with massage, yoga and three pools. 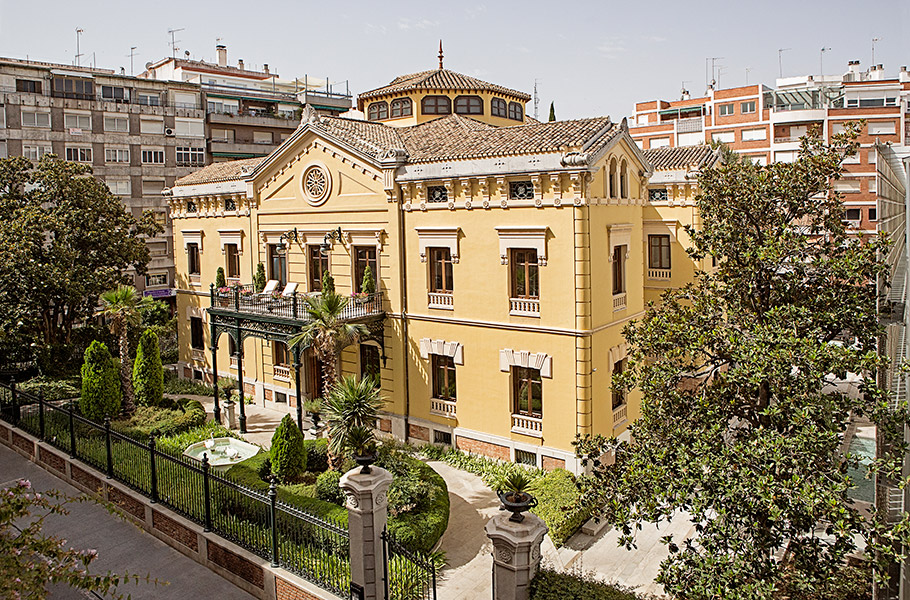 Your first hotel is a five star urban oasis, where original architecture and modern design fuse to create a stroke of pure genius. A former palace... 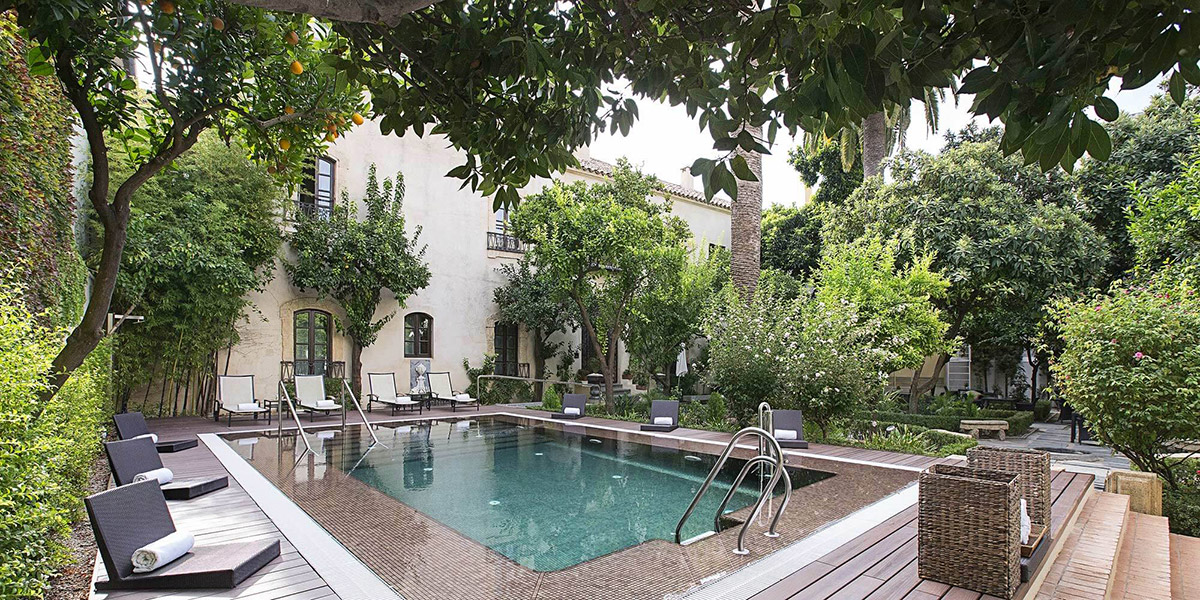 This 5 star hotel is located in the medieval centre of Cordoba and is an inspiring mix of past and present, the result of a painstaking restoration project of a 16th century palace... 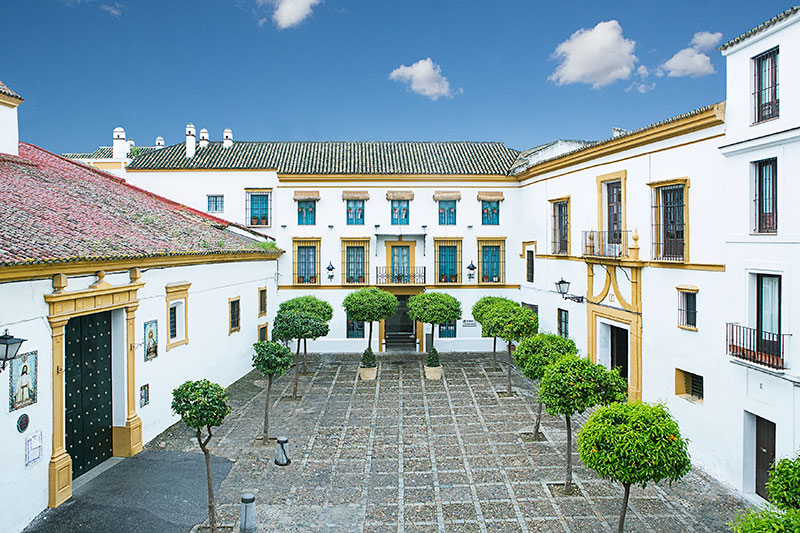 In Seville you will be based inside the former palace of The King of Baeza, which was given to him by the King of Spain in the 13th century. It is charming in design and luxurious...

I cannot praise you enough for your outstanding organisation of our trip which was spot on in each place. The accommodation was very pleasing and people could not do enough to make us comfortable; especially in Seville and Cordoba. The tours were good. The guides; lovely – I was enthralled with the description of the Golden Age under The Moors for about 700 years. I hope all is well with you Nicola. You can be assured that I will recommend you to others as Alison recommended you to me.

Nicola; A perfect trip - all the plans were all in order - not a hitch at all- great guides - hotels excellent - especially Granada. We fell in love with Spain - do you have any other trips in Spain? Again many thanks for making it all happen
Kindest personal regards

We have now returned to Australia after our memorable holiday in Spain and beyond. I just wanted to say thank you for your excellent holiday planning and organisation. Everything went like clockwork....all our hotels were wonderful, the guides in each place were knowledgeable and interesting, and the cars and drivers between each city were terrific.

We got into the swing of life in Andalucia very quickly, enjoying the food, the atmosphere and the very memorable sights. We particularly enjoyed our day in Jerez with Roger, from A Question of Taste. We have already recommended your company to several other couples, and will continue to do so. Kind regards, Joanne and Barry

Hi Nicola, Just wanted to thank you and Danielle for enabling us to have such a wonderful time in Andalucia. The hotels were lovely the transport arrangements were really efficient and the insructions easy to follow! We enjoyed every minute of our stay and with your help managed to get a real flavour of both cities and their cultures. The Alhambra palace and gardens were the highlight but so glad we got to see Seville and its brilliant monuments and the Flamenco show. We loved it. 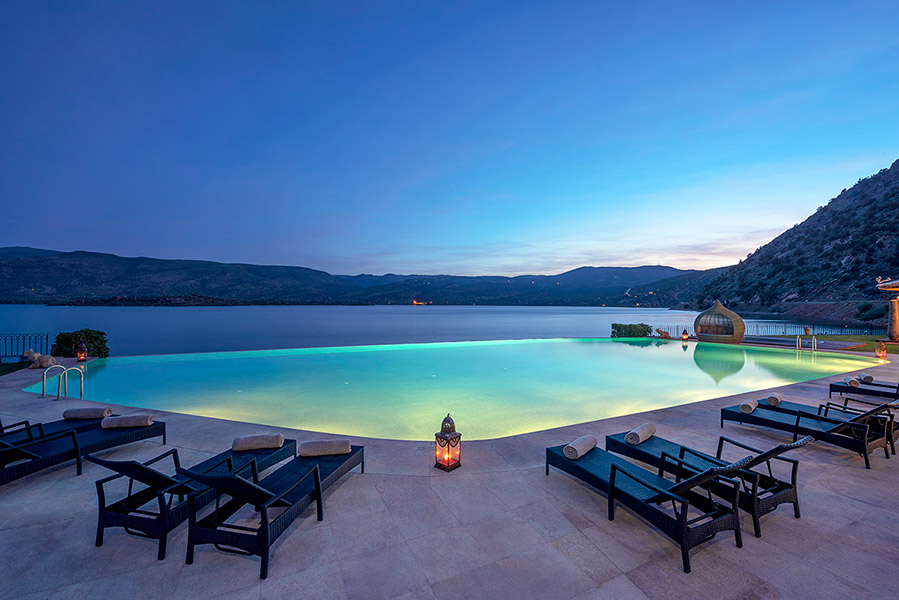 Feel like royalty from when you step off the plane and are whisked away to the first of your 5 star riads where discreet old school service, style and sophistication abound and nothing is too much trouble… 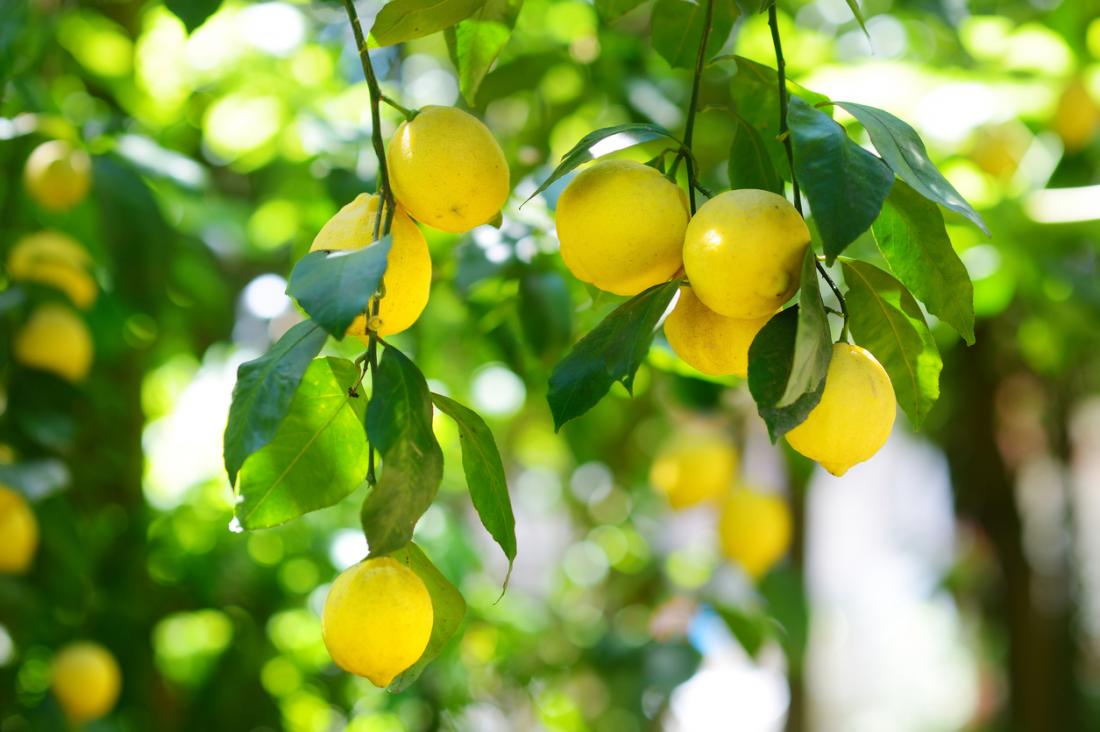 Another Similar Tour will soon be defined here

Lorem ipsum, or lipsum as it is sometimes known, is dummy text used in laying out print, graphic or web designs. The passage is attributed to… 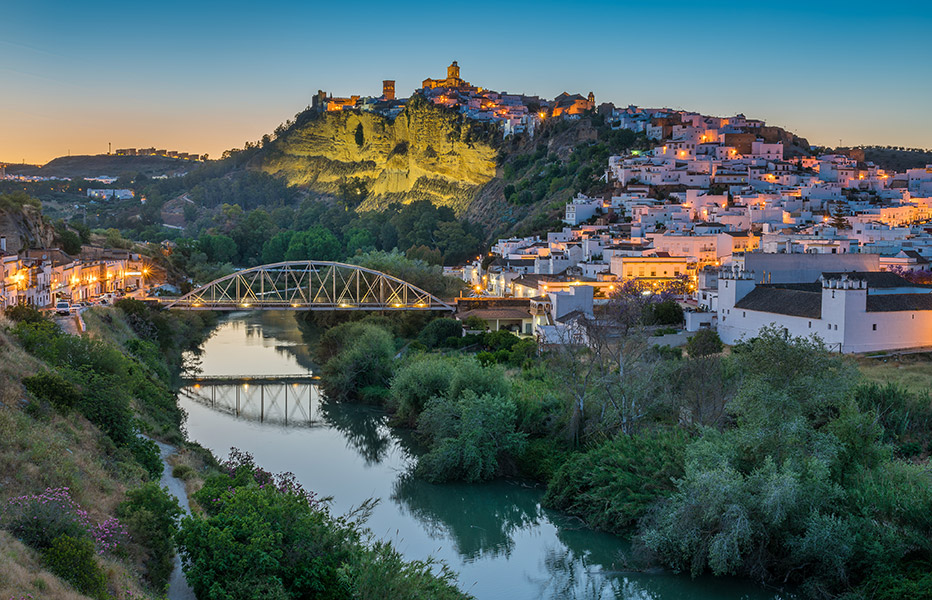 Paradors and Palacios of Andalucia

Since Moorish times, the Andalucians have been building exquisite houses and palaces to celebrate their wealth and good fortune…